In March 2016, Simon and John decided to work together on the ANTERRAN comic series, with a first issue to be self-published on May 11th, along with the Steam release of Catyph.

"I met John to work on the Mon Village est Magique cooperative comic book. I was very happy of this first cooperation and had in mind to work again with this enthusiastic illustrator. John never hid his interest in sci-fi projects and his passion for comics, and we both agreed to work on the ANTERRAN project. The original script had already been written in 2014-2015, and John immediately liked it after reading the first pages. It was decided to work on the creation/illustration process in April: 25 pages to be produced in 1 month. We worked together on the main designs and world consistency, and John did an impressive job to sketch and paint all pages. We really hope that you'll be interested by this first part of the series, because we have in mind to make several links with the games: how did the ARK begin its mission? Why are the Cubes dangerous, and where do they come from? You'll find many answers in ANTERRAN!"

In 2014 and 2015, while thinking of new Black Cube projects, Simon wrote the story of the Anterran people: the creators of the ARK and the Cubes. There are a lot of references to them in ASA and Catyph. The starting point of the story of ANTERRAN was an extract of the diary of ASA: there's a whole part where its author Philippe Forté translates a text written by an Anterran scientist, who warns about the possible dangers of the Cubes.

The script of ANTERRAN was built from this specific part of the diary: the scientist of planet Talifa evoked in this extract became one of the main characters of this new story, and named Stan'ley. Stan'ley was recording some of his own memories after terrible events happened on his planet. It was millions of years before the events of ASA and Catyph, and these writings were saved in the very memory of the Black Tower, aboard the ARK, for eternity. The name Anterran was then given much later to the mysterious creators of the Cubes, by Philip Forté in ASA (Anterrans simply means "Ante Terrans" = before Terrans).

Stan'ley is one of the very few survivors of an apocalyptic event that occured ten years before the story. The Talifan/Anterran society used to rely a lot on the Black Cube technology. It was very convenient, but you could say that they played with the devil, and opened pandora’s box, somehow: the Cubes became a trap, and their society collapsed in a single day. Terrible things happened, the towns were destroyed, people became mad. In the memory of the Talifan people, it is now known as Day 0: the day they lost everything, and the beginning of a new era...

Here's an extract of the script that relates the history of Stan'ley, and the future of the Talifans:
<< We discover planet Talifa, just before the real story begins.

Narrative
Daily life on planet Talifa. Millions of years ago.

Many people walk in the street of an hi-tech city. Most of them look like human beings: they're the Talifan people. We can see them talk with other alien creatures and androids, and they seem to live peacefully together.

Most of these people use strange devices in the form of black cubes or black dies, sometimes wearing them on their glasses, sometimes carrying them as backpacks, or even integrated in their own bodies. They seem to use them as telephones, music devices, power sources for their cars... All around them, the skycrapers integrate these artefacts in their architecture. Some of these black cubes also fly in the streets, like drones. It is a society that relies totally on this "Sok'a" technology. [...] >>
With this basis of text, Simon could discuss the project with John, who then started the first designs of the world and characters.

As soon as the first ideas were agreed, and the script validated by John, he began the first rough sketches. Some of his early drawings look like this:
These quick illustrations from John represent Stan'ley and Oliv'r, two of the main characters. They were based on very rough sketches made by Simon, who immediately liked the first designs by John. Everything was agreed on very quickly: Anterran people usually all have dark hair, their clothes had to be worn and brownish. The life of the rare survivors after Day 0 is tough, and the world of ANTERRAN is often very close to the steampunk genre.

Then a few tests were made to integrate the characters in very simple environments. Seeing them in situation was very important before the production really started, but creating the backgrounds is time consuming. We decided to focus on simple scenes, often unpainted. It was fast and allowed us to imagine the final result. This is one of these research illustrations: 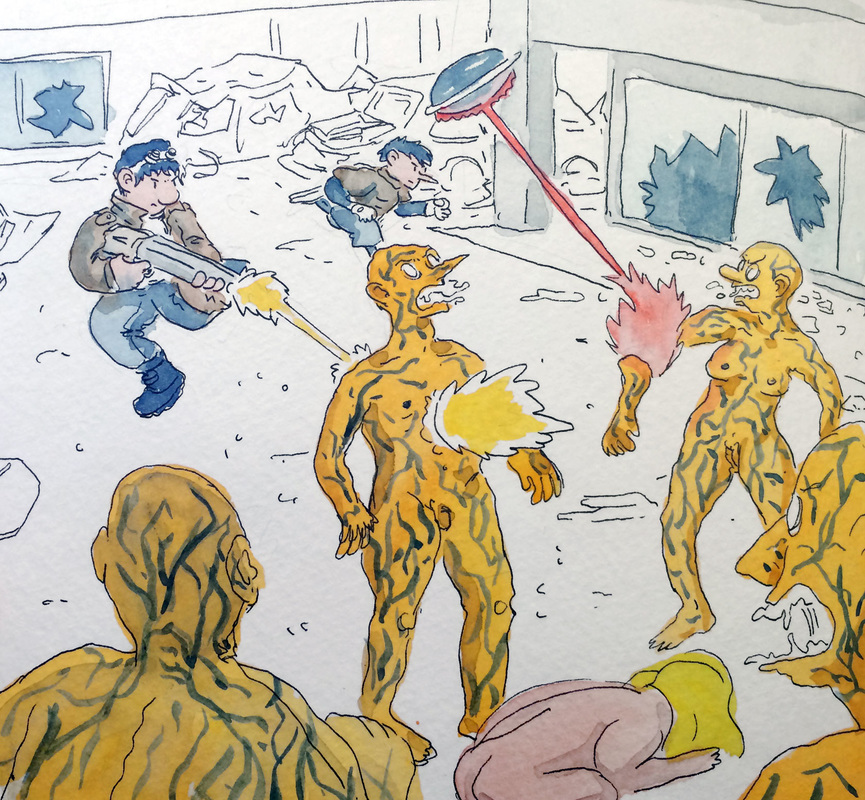 The creation process of John is interesting because, on the contrary of many other comic artists, he often uses traditional tools. On other works, he sometimes uses Photoshop, but ANTERRAN is mainly created by hand. You can see below some of the tools used by John: 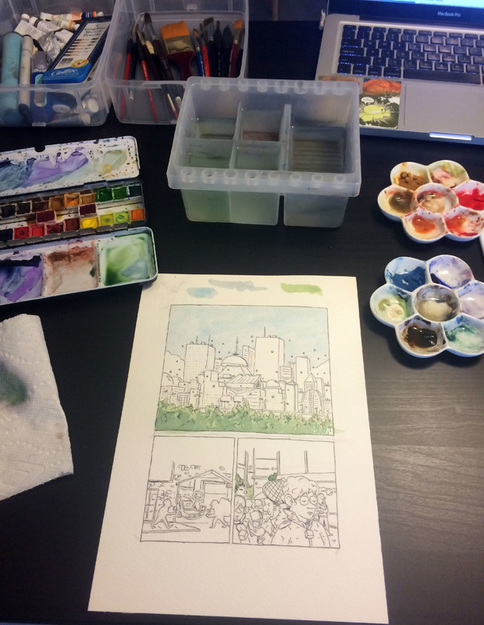 ANTERRAN is mainly designed with usual pencils on a standard A4 paper. Many brushes are available to apply the watercolor painting. Using absorbent paper and other techniques, John can create a very personal texture effect, which brings a unique touch to his work. 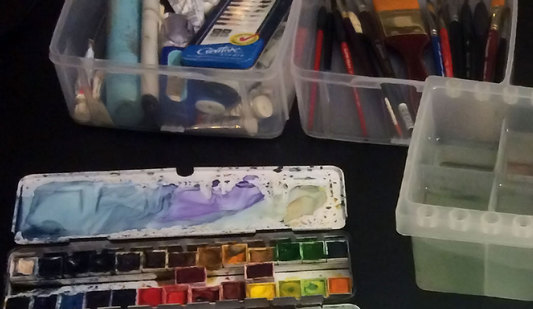 Before the final illustrations are done, John creates rough illustrations on draft papers, in order to prepare the future layouts. It is a quick stage in the whole process, but it has to be carefully thought-out, and repeated for each page of the book.
When these pages are ready, John can show the result to Simon, who has the opportunity to submit changes before it is too late! Indeed, as soon as John begins to work on the next stage, it will not be possible anymore for Simon to ask any modification of the layout and scenery. The only possible changes will be the texts, which will be added in Photoshop later on a separate layer, in order to simplify the localization from English to French (and maybe more, if the project is successful enough?).

With our extract from the script (above), the idea is to illustrate the Talifan society as described in the text. John decided to make it short in 2 pages (8 thumbnails in total). While a text can be very detailed and descriptive, a comic page usually leaves enough space for the imagination of the reader. It is the technique of the ellipse in comics: space and time are divided in a very unique way, where only the key situations are illustrated.

This is the first page of the comic, based on the beginning of the script: 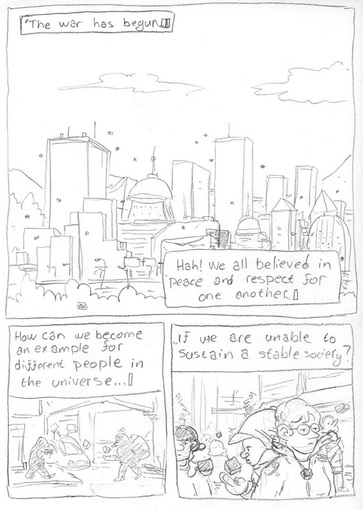 The texts inserted in the bubbles come from the diary of ASA (see explanations above). Finally John took a photo where all the pages are gathered: for the very first time, we could read the complete book! 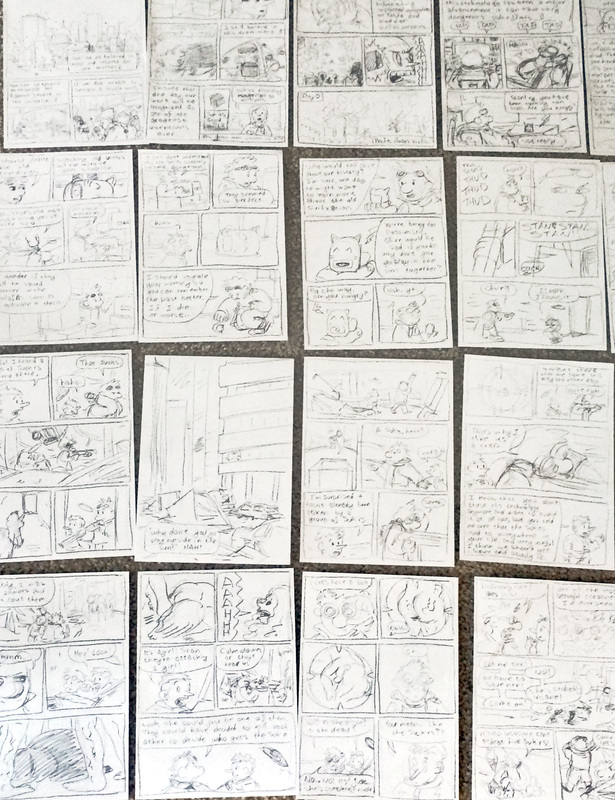 The 24 rough pages were finished very quickly, in about a week. Once approved by Simon, John had the possibility to proceed with cleaning the drawings. This second pass in the process is done on a new sheet of paper, usually of a better quality. The idea is very simple: recopy each of the rough pages to make them final. It is a much longer work, where it is required to be careful and avoid stains. Here's a comparison that shows the process well:
As you can see from these two photos, the page on the left is the rough page from the previous stage, and the one on the right is the final page. This one has to be made very carefully: the lines are darker and need to be neat. It is where the watercolor panting will be applied. The next photo shows the final result. 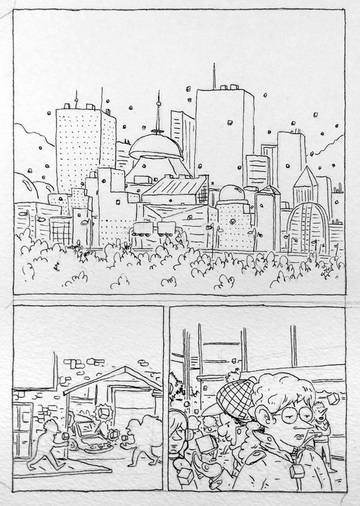 Working on the illustraton is interesting and gives a good idea of the final look of the book. However we're always more excited to see the result in colors!

Adding colors is a work of patience. You could see the tools, watercolor paintings and brushes used by John: it is very important to use the right size of brush, apply the right texture effect, avoid stains and dripping paint, prevent the paper from warping, choose the right tints, etc.

At this stage, any mistake can be critical, and can lead to a disaster. On the contrary of the digital tools, it is not possible to cancel the last action, the "ctrl+z" shortcut doesn't exist in real life! (too bad!). So it is necessary to work slowly and stay concentrated from the beginning to the end.

Despite the challenge that real watercolor paintings can represent, it is however an interesting tool that provides a very beautiful result. It is different of what can be achieved with a computer software. 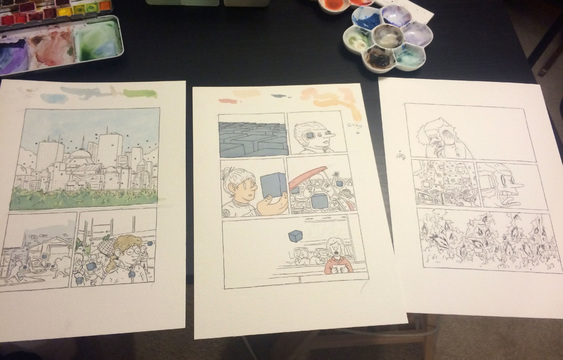 It is possible to work on several thumbnails at the same time. In fact it is even recommended: the first reason is that it often allows to apply the same tints without having to wash the brush. Indeed, painting green trees then black cubes (like above) requires to rinse the tools. On the contrary, painting the blond hair of the character on the left, and the skin of the character in the middle can be done by blending yellow and red together. You can see at the top of each page that John usually makes color tests in the trim/bleed area.

Another advantage of working on several pages at the same time, is that it allows the previous thumbnails to dry!

Finally we have seen the main steps of the creation process of ANTERRAN already! From the script, John created rough pages, then final pages, and then colorized them. The whole process was done in a bit more than a month, wich is a very short amount of time when you think of the work of patience that it represents!

This is a comparison of the 3 stages seen above: